Raise your hand if you’ve ever used Quicken personal finance software or mint.com to assist you in keeping track of your finances. Chances are if you haven’t used them you’re at least familiar with them. Okay, feel free to put your hand down now. Budgetable.com is in the same realm of free online personal finance software as mint.com is and today I’m going to go over a few of the features that really help them stand out from the competition. I’m also going to be giving away ten invites to Budgetable (which isn’t yet open to the public and still requires an invite to use). More on that later.

I met the founder and CEO of Budgetable, Ryan Bales, at the 2011 Financial Blogger Conference in Chicago. He and his brother were showing off this new money tracking application and asking for feedback from all of the personal finance nerds (myself included). When Budgetable finally went into beta testing Ryan extended me an offer to join in on the beta. Happily I accepted and so here we are. During our email communication I had the chance to ask Ryan what inspired him to create Budgetable and here’s what he had to say:

“I came up with the idea of Budgetable after shopping online for a new TV. Usually when I buy something online and see a place for a promo code at checkout, I jump on Google and search for one, just to save a few bucks here and there. The problem is most of the time it takes forever to find a working promo code. I thought, it would be really cool if I could bring deals to online banking. By integrating the two, I’d always know when my favorite stores have great deals and I’d save a ton of money. I wanted to build this all around a really powerful money management tool so everything you need to manage your finances has been built right into Budgetable.”

That’s Budgetable in a nutshell. It’s a fantastic money management tool (along the same lines of Mint.com) but with built in deals and savings. Can’t get much better than that if you’re looking to save money.

Let’s dive right into the review and my favorite features on Budgetable.com, which are the Spending Heat Map, the Deals and the Cash vs. Debt indicator on the overview page.

When you first login to Budgetable you’re greeted with the Overview page, which as you can see in the screenshot to the right has a few key areas. First is the cash indicator, near the top left of the screen. This tells you how much cash you have between all of your linked checking/saving accounts. Directly beneath that you’ll find your linked accounts and their balances followed by the Cash vs. Debt indicator.

The account linking works just as well as you’d expect it to (think Mint.com or another online money managing tool), but I should disclose that until Budgetable is fully open to the public it’s limiting the number of accounts you can link to two — one checking or saving and one credit account. I didn’t have any difficulties linking up my bank or credit card. Budgetable claims to link to over 10,000 banks and other financial institutions between the U.S. and Canada, so I don’t imagine you’d have much difficulty linking your accounts up unless maybe you bank with a very small institution. 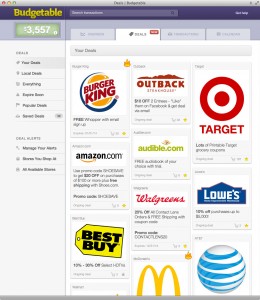 The last feature on the overview screen is the Deal Alerts section, which will pull in information from stores you shop at and allow you to select your favorites. Once you’ve selected them if there are any deals they’ll show up on the deals screen, which you can see a screenshot of to the right.This page is pretty simple. If you have selected any favorite stores on the overview page then if there are deals to be had with said merchant they will show up on this page. For example, you can see a promo code for 20% off all contact lens orders at Walgreens. This is easy to access, with a simple promo code you’d plug in at checkout. Not all of the deals are so easy to take advantage of. For example the 10% deal at Lowe’s requires you to fill out a web form to receive the coupon. Nonetheless it’s a nice little feature that has the potential to help you save money!

The deals screen also has local deals (think Groupon) which are definitely hit or miss, but again have the potential to help you save. For a free service that won’t email you spam every day (cough groupon cough) it’s definitely a nice little addition.

The transactions page is fairly standard if you’re used to other online money managers, but really does a great job of looking clean and being easy to use. All of the categories are color coded so it’s easy to pick out certain types of transactions and Budgetable also breaks out Essential and Nonessential transactions, which while not totally accurate at first will get better as you categorize your transactions. I find myself a bit lazy about categorizing transactions, so hopefully this technology will continue to improve but if you don’t mind spending 5 minutes a week to categorize all of the uncategorized transactions then it’ll certainly help make all of the fancy charts and graphs more accurate.

Get your own login

Overall I’m very impressed with Budgetable. It’s a fresh new take on world of online personal finance applications, and definitely deserves a look. The great news is that Ryan has been kind enough to provide me with ten accounts to hand out to all of you. Here’s how you can get one:

One response to “Budgetable.com: A Review”